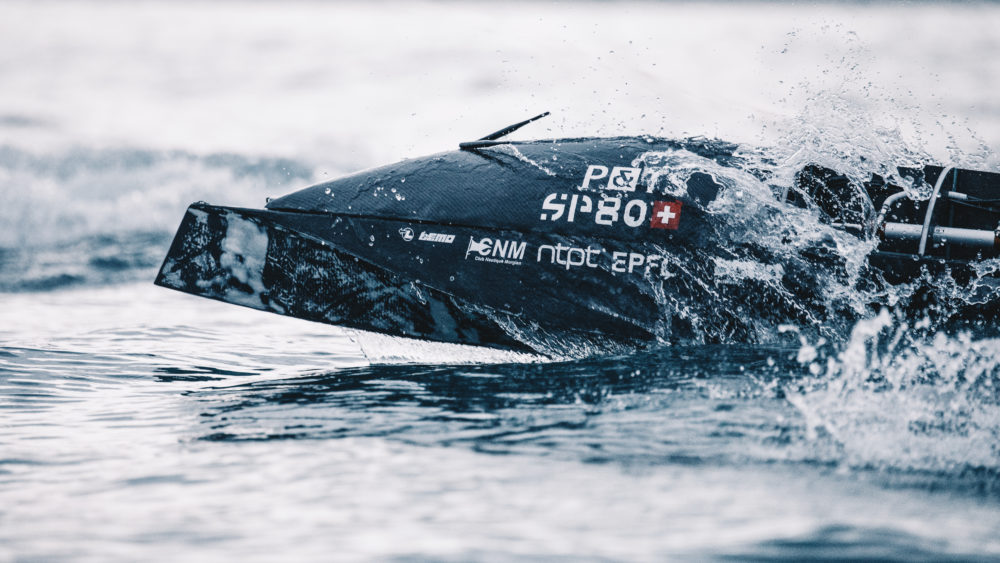 SP80: first tests of the prototype supported by P&TS!

The SP80 project, actively supported by P&TS, aims to reach 80 knots (150 km/h) in sailing, breaking the current record of 65.45 knots. Since last June, the young Lausanne team has been testing a small-scale prototype of their boat on Lake Geneva. The first results, revealed for the first time in video, are promising!

The Swiss project to beat the sailing speed record was revealed to the public a year ago during the celebrations for the 20th anniversary of P&TS at the Théâtre du Passage in Neuchâtel. A model of the first design was presented on this occasion.

Setting up such a challenge involves many intellectual property considerations, for example in building a brand strategy, negotiating sponsorship contracts, protecting technology and design, negotiating numerous development agreements with industrial and academic partners. Having supported the Solar Impulse project in similar approaches, it was natural for P&TS to commit itself as the main partner in this challenge and thus contribute to moving it from the initial sketch to the challenge that will break the world sailing record.

Today, the team, made up of around forty engineers and EPL students, is carrying out tests on Lake Geneva with a scale model 1⁄2 of the final boat. The launch of this prototype is a key stage in the record race. It enables a number of concepts to be validated and the begining of optimisation in order to build the final boat, which will begin in 2021.

Mostly built as part of student projects within the Lausanne school, this floating laboratory was designed from the outset to be modular. The SP80 team can quickly replace and test different hull shapes and appendages, a valuable learning experience in view of the record. In order to reproduce the strengths of a kitesurfing wing without depending on wind conditions, the prototype is currently being towed by a motorboat. Benoit Gaudiot, co-founder and pilot for the record, commands the boat himself from the motorboat with a steering wheel connected to the prototype by a hydraulic piston. Beyond the first sensations at the helm, a lot of data is recorded during each outing in order to allow their comparison and the improvement of the model’s design.

About ten tests have already been carried out and the results, presented in the video, are very conclusive. They validate the latest simulations carried out and demonstrate the stability and control of the boat at high speed. These qualities, which are essential for the record, were notably achieved thanks to a mechanical stabilisation system for which P&TS has filed a patent.