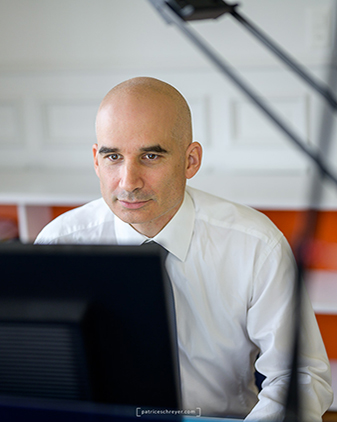 As a patent attorney, I am involved with protecting the technological advances that our clients have made in a wide range of technologies. This makes this profession demanding but very exciting!

Olivier Rampa holds a Bachelor of Science ETS (HES-SO) degree in electrical/micro-technology engineering from the Engineering School of Geneva and a Graduate Business Qualification from the Curtin Business School of Perth (Australia).

Olivier started his professional career as a Sales Engineer in the semiconductor industry for three years during which he was involved in promoting across Europe testing and monitoring equipment used in quality control in the manufacturing process of silicon wafers.

Olivier began his career as a Patent Agent in 2004 in an intellectual property law firm in Geneva mainly active in the protection of luxury goods where he worked for eight years for the protection of inventions in different fields of technology with particular expertise the field of horology. Olivier worked thereafter in two other IP law firms in Geneva and then in the canton of Vaud.

He also provided introductory courses to the various intellectual property rights at the Engineering and Management School of the canton of Vaud and in the framework of a Master of Science in Lausanne for development of innovative products and/or services.

His expertise ranges from patentability and freedom to operate analysis, drafting patent applications, the follow-up of examination and grant procedure (European, Swiss and other national patents) to the opposition proceedings before the European Patent Office as well as litigations.

Olivier has two daughters and spends most of his spare time with his family and practicing running.